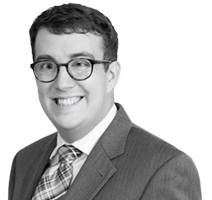 Ezra joined Anderson & Kreiger in 2020 after graduating from Boston College Law School. While at BC, Ezra served as a Managing Editor of the Boston College Law Review, was Vice President of the Jewish Law Students Association, and enjoyed welcoming prospective students to campus as a Student Ambassador. During the summers, he interned with Judge Patti B. Saris at the U.S. District Court for the District of Massachusetts and was a 2019 summer clerk at Anderson & Kreiger. As a third-year law student, Ezra helped successfully argue relief for a Salvadoran asylum seeker in the U.S. Court of Appeals for the Ninth Circuit.

Prior to law school, Ezra worked in Washington D.C. for four years, including as a communications associate for a criminal justice non-profit.

Outside of the office, Ezra enjoys running and spoiling his cairn terrier.