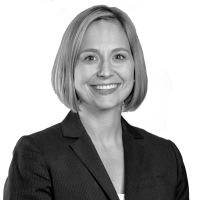 Melissa represents private and public sector clients in commercial, regulatory and administrative matters. Over the last several years, she has defended the Massachusetts Gaming Commission in a series of cases challenging the Commission’s award of a casino license to Wynn Resorts.  Melissa also represents municipalities and private entities in litigation and other forms of dispute resolution in a range of matters, such as land use, environmental and contract disputes.

Melissa is committed to pro bono and civic matters.  She recently represented, on a pro bono basis, several Boston Public School students and various organizations in their efforts to preserve the statutory cap on the number of charter schools in Massachusetts.  Melissa also is a member of the board of Lawyers for Civil Rights.

Melissa also has been admitted on particular matters in several courts around the country.

In her free time, Melissa enjoys hiking, cycling, cooking and traveling. She spends most of her time outside of the office, however, attempting to tame her energetic children.