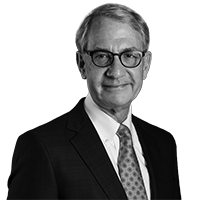 Corporations, colleges and universities, and dozens of governmental entities from coast to coast turn to Scott for his decades of experience litigating complex commercial and regulatory cases.  His areas of focus are:

These are just a few of the many varied and often precedent-setting cases that Scott has litigated in both state and federal trial and appeals courts over the years.  Scott has argued free speech cases for a wide range of clients, from prisoners to a local university; defended a novel artist’s “moral rights” suit against a major mutual fund company; and structured the successful defense of multi-million dollar claims against a leading biotech company in the courts of Cyprus.

Scott continues to be an active participant in the civil rights and anti-tobacco communities and frequently takes on politically-charged cases.

Scott speaks at conferences throughout the United States on complex litigation and airport regulation.

Scott has taught a seminar at Columbia Law School and spoken at various national conferences about the moral rights of artists.