What Did He Know and When Did He Know It? Court Narrows the Definition of a “Willful” Violation of Environmental Law, but Not Enough

What Did He Know and When Did He Know It? Court Narrows the Definition of a “Willful” Violation of Environmental Law, but Not Enough 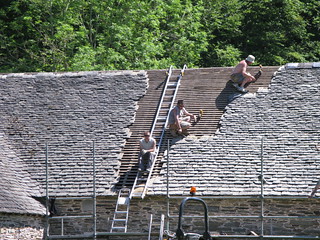 Roof repair: Falling may be the least of your worries

A new SJC decision narrows the Department of Environmental Protection’s (DEP) authority to impose penalties without notice, but leaves that authority unfairly broad.

The Administrative Penalties Act (G.L. Chapter 21A, § 16) authorizes DEP to impose penalties for violations of environmental statutes, a key part of DEP’s enforcement capability. DEP ordinarily must give a violator notice and time to comply before imposing a penalty, but it can proceed without notice under six exceptions involving serious or health-threatening violations. In Franklin Office Park Realty Corp. (FOPRC) v. Commissioner of DEP, 466 Mass. 454 (2013), the Supreme Judicial Court addressed the exception for a “willful” violation.

FOPRC replaced the roof on a three-family house that it owned. When the shingles turned out to contain asbestos, DEP imposed an $18,225 penalty for Clean Air Act violations without notice or a chance to cure the violations. It argued that the violations were “willful” simply because FOPRC intended to remove and dispose of the shingles. In a rare rejection of DEP’s reading of an environmental statute, the SJC disagreed with such an aggressive standard. It held that, although FOPRC did not have to know the environmental laws or intend to violate them to commit a willful violation, it did have to know at least the facts that made its conduct illegal (that the shingles contained asbestos).

Unfortunately, however, the SJC’s ultimate holding was both more aggressive and more uncertain than the standard it articulated. It upheld DEP’s penalty on the ground that FOPRC should have known that the shingles could contain asbestos. Such a low bar is troubling, potentially making many homeowners replacing their roofs as well as other relatively innocent persons “willful” violators of environmental law.

National Flood Insurance and Businesses: The Price of A Clam Roll May Be Rising »