“This will be an intensive process,” said Governor Charlie Baker, elaborating on the executive order he signed recently that initiates a one-year comprehensive review of all Executive Department regulations. The order affects state environmental regulations, which could change substantially by March 2016.

While the order worries many environmental advocates, it is as yet unclear how far-ranging its effects will be. Still, it seems certain that the review will at minimum constitute a significant drain on staff time at MassDEP and EEA. The result will likely be delays in environmental permits and applications for businesses dealing with those agencies in the next twelve months. 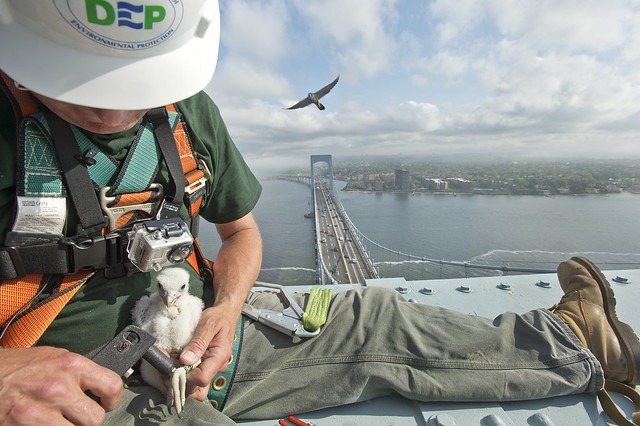 Massachusetts, but not the federal government,
currently places the Peregrine falcon on its protective list.

The order sunsets all existing regulations on March 31, 2016, unless:

In addition, the order requires all regulations to have a “business/competitiveness impact statement.” In other words, MassDEP and EEA staff will be working on these impact statements this year, in addition to their regular responsibilities.

The order does exempt existing regulations deemed “essential” to the environment. Baker’s Secretary of Administration and Finance also has the right to grant waivers.

The Baker Administration has responded to critics of the order, saying it will review “only onerous, unnecessary regulations.” Governor Baker campaigned as a moderate sensitive to environmental concerns, according to the Boston Globe.

One of the points of contention with the order is the requirement that Massachusetts regulations not exceed federal requirements. Advocates point to the burden that a dual system places on businesses when federal and state regulations differ.

Opponents see it differently. “Massachusetts has a long and successful history in using the best available science and setting our own standards to keep our air, water, and natural resources clean,” said Ken Kimmel, MassDEP Commissioner under former Governor Deval Patrick, as quoted in the Globe. “Why should we be subservient to Washington, DC?”

Under Governor Patrick and Commissioner Kimmell, MassDEP undertook a comprehensive review and reform of its regulations, resulting in significant revisions in many areas. The process was launched in 2011; the revised regulations were promulgated in 2014.

Final EPA/Corps “Waters of the US” Rule Increases Predictability, But Also Scope of Jurisdiction »