A recent Supreme Court decision calls into question the constitutionality of most sign bylaws based on content regulation. In particular, many election sign bylaws may violate the First Amendment. 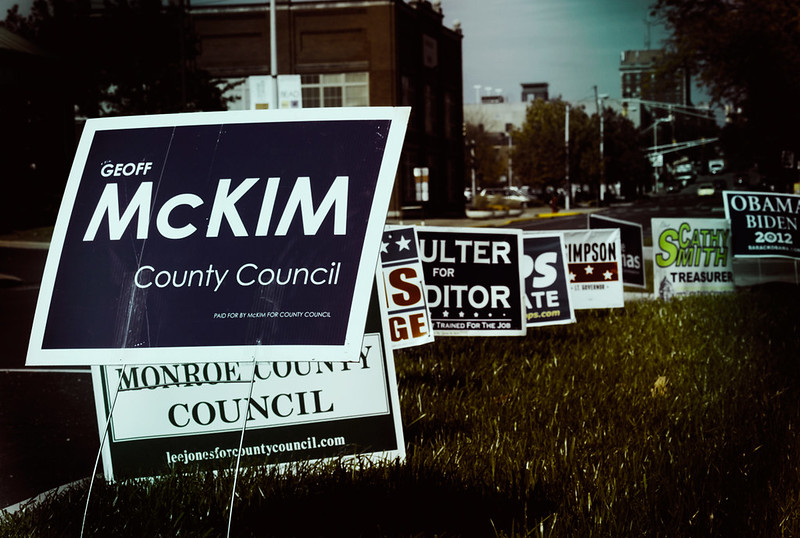 While the Court held that municipalities still have “ample content-neutral options available to resolve problems with safety and aesthetics,” three justices who disagreed with the Court’s reasoning countered that many “entirely reasonable” sign ordinances “are now in jeopardy.”

The minority worried about the “unenviable bind” that municipalities might find themselves in following the decision: either “repeal the exemptions that allow for helpful signs on streets and sidewalks,” or else lift “sign restrictions altogether and resign themselves to the resulting clutter.”

The National League of Cities agreed. The decision “wreaks havoc on [the] ability of local [governments] to implement sign code regs that are responsive to communities,” said Executive Director Clarence Anthony in a tweet.

At Issue: The Regulation of a Sign Announcing a Church Service

The nine justices unanimously struck down as violating the First Amendment an Arizona town’s regulation of signs announcing nonprofit groups’ meetings. The regulation mandated that such signs be at most six square feet, and only on display 12 hours before and one hour after the meeting.

After clashing with code’s compliance manager about its adherence to the rule, a church sued the town. The Court noted that the church was “small, cash-strapped,” and that these signs were “an economical and effective way for the Church to let the community know where its services are being held each week.”

The town regulated two other categories of signs more leniently. “Ideological” signs were most favored – they were not subjected to time limits and could be up to 20 square feet. Election signs were more stringently regulated (but still more favored than meeting signs) – they could be sixteen square feet on residential property, and were time-limited to 60 days before a primary to 15 days after a general election. These regulations were also ruled unconstitutional.

A six-member majority, led by Justice Thomas, held that the town’s code regulated signs based on their content (ie: announcing a meeting, showing support for a candidate, or advocating for an ideological belief). In this, it differed from the Ninth Circuit, which had ruled in the case that the speech was content-neutral.

In what became a point of contention among members of the Court, the majority then held that content-based restrictions on speech automatically trigger strict scrutiny – an exacting standard that it is difficult for government entities to overcome.

To survive strict scrutiny, the government must prove that its regulation is narrowly tailored to a compelling interest. It is not sufficient for the regulation to be “entirely reasonable” or for the government to have lacked any improper motive (such as the desire to suppress a particular viewpoint). “Innocent motives do not eliminate the danger of censorship” of disfavored speech, noted the Court.

Can You Still Regulate Signs to Keep Your Town Looking Nice? Unclear.

The town failed the strict scrutiny test. The Court did not rule on whether the town’s justifications – aesthetic appeal and traffic safety – were compelling or not. (But it indicated that compelling justifications might primarily revolve around safety.)

The Court did rule, however, that the Town had not closely tailored its rule to its aesthetic and safety rationales. For example, it said, “[t]he Town cannot claim that placing strict limits on temporary directional signs is necessary to beautify the Town while at the same time allowing unlimited numbers of other types of signs that create the same problem.”

The Court noted that some aspects of the sign code were constitutional, such as its regulation of signs’ size, building materials, lighting, moving parts and portability. It also noted that municipalities have flexibility under its ruling. For example, they can entirely forbid posting signs on public property.

Predicting a Flood of Needless Litigation: The Dissent

Concurring only in the judgement, the Justice Kagan-led minority agreed that the town’s sign code did not pass strict scrutiny (“or even the laugh test”).

But it noted pragmatically that the “subject matter exemptions included in many sign ordinances do not implicate [First Amendment] concerns,” such as preserving a robust marketplace of ideas and ensuring that the government does not regulate speech based on its message.

Kagan illustrated her point with the Highway Beautification Act, which limits signs along interstate highways unless they direct travelers to scenic or historic attractions (or to free coffee). While this exemption to a total ban on signs for interesting attractions is content-based, it does not infringe on the rights the First Amendment was intended to protect.

“We can administer our content-regulation doctrine with a dose of common sense,” wrote the minority. We “may do well to relax our guard so that ‘entirely reasonable’ laws imperiled by strict scrutiny can survive.”

“As the years go by, courts will discover that thousands of towns have [entirely reasonable] ordinances” that do not survive strict scrutiny, predicted the minority. “This Court may soon find itself a veritable Supreme Board of Sign Review.”