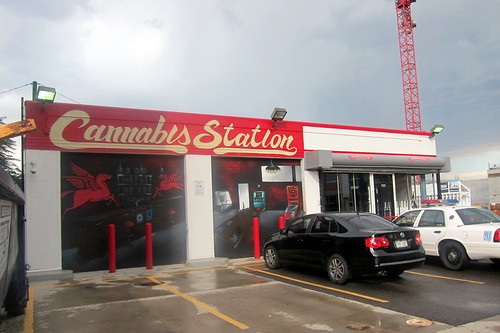 Coming to your town soon – unless you opt out. Note the police car!

Given the stunning and widely unexpected results of the presidential election, the seismic change in the state’s marijuana policy effected by the passage of Question 4 has received less attention in the election aftermath than it might have in a different year.

Many of the initiative’s opponents pointed out that the proposed law would be excessively friendly to the “budding” marijuana industry, and contained provisions that would cause implementation problems for state and local governments. But the voters approved it anyway, by a comfortable seven-point margin, largely out of the belief that prohibition has failed, not as an endorsement of the specific regulations proposed in the law.

But cities and towns now have to deal with those provisions, flawed as they are. Here’s a quick guide to the new law as it affects municipalities.

Question 4 makes three sets of changes to the General Laws:

By design, these new provisions superficially mimic the statutory controls on the sales of alcohol (G.L. c. 138). It creates a new regulatory agency, the CCC, having licensing and regulatory powers roughly analogous to the ABCC. The differences, however, are much more significant, particularly with regard to the role of municipalities in the regulatory process.

Unlike Chapter 138, there is no local licensing authority. Instead, the new CCC will license all marijuana establishments in the first instance. If a town does not regulate these establishments, they will be allowed without local regulatory oversight, subject to zoning (which cannot prohibit recreational sales in any area where a registered marijuana dispensary is allowed).

While the new Chapter 94G allows municipalities the option to prohibit marijuana establishments within their borders, they must opt out if they wish remain the marijuana-equivalent of a “dry town” (a “non-high town?”). This is the opposite of Chapter 138, which required towns to opt in. A municipality can opt out by adopting an ordinance or bylaw that either:

[See G.L. c. 94G, § 3(a)(2)]. Note that “types” of marijuana establishments include marijuana cultivators, marijuana testing facilities, marijuana product manufacturers, and marijuana retailers; a local bylaw could prohibit any or all of these by type.  Note also that this is a limited menu that appears to restrict towns to one of these three approaches. Given that this section makes no mention of zoning, municipalities should probably frame their regulations as general ordinances or bylaws, and only use zoning in a complementary fashion to regulate siting.

A key, unresolved question is HOW a city or town may enact such an ordinance or bylaw. G.L. c. 94G, § 3(a)(2) indicates that it can only be adopted “by a vote of the voters of that city or town.”  Some Question 4 proponents have indicated that this requires a ballot vote. But, given that there is no statutory mechanism for submitting local ordinances or bylaws to the voters, it is debatable whether this clause creates one. The Legislature needs to resolve this issue, if possible, before towns start setting their warrants for their annual town meetings in the spring.

Many town officials are already asking whether cities and towns may adopt zoning moratoria to delay the siting of marijuana establishments. The Attorney General’s office is currently considering this question and expects to get some guidance out in the near future.

However, as noted above, the new statute prohibits towns from enacting zoning to restrict the sale of marijuana for non-medical purposes anywhere where medical marijuana facilities are permitted. This may be read as prohibiting even temporary moratoria in those areas. To the extent that it is possible to adopt an ordinance or bylaw under § 3(a)(2) (discussed above), it may be safer to use that mechanism to prohibit such facilities entirely; if a city or town wants that ban to be temporary, it could include a “sunset” provision in the ordinance or bylaw (stating that the bylaw will be of no further force and effect after a specified date).

G.L. c. 94G, § 3(b) allows for local initiative petitions to allow “the sale of marijuana and marijuana products for consumption on the premises where sold.” Such a petition would have to be signed by 10% of the voters of the municipality who voted in the last state election, and approved at the next biennial state election.

It will be interesting to see to what degree the legislature may entertain special exceptions, as it does now with regard to alcohol licenses. Would towns maximize their control by prohibiting such facilities entirely, and then making better deals through home rule legislation? If the public sentiment in a town is to prohibit marijuana establishments and see how it plays out in other communities, that may be a wise thing to do.

If a city or town does allow marijuana sales, it may also opt to impose an excise surtax of up to 2%, on top of the 3.75% excise tax due to the state.  Note that Chapter 94G, § 3(d) contains an extraordinary prohibition against agreements requiring payments to the municipality that are not “directly proportional and reasonably related to the costs imposed upon the city or town by the operation of a marijuana establishment,” creating strong pressure to look to the surtax – and only to the surtax – for revenue that a town cannot document as necessary to offset the cost of hosting the facility.

The law states that nothing within it “requires any accommodation of any on-site medical use of marijuana in any place of employment, school bus or on school grounds, in any youth center, in any correctional facility, or of smoking medical marijuana in any public place.” It also does not “require an employer to permit or accommodate conduct otherwise allowed by this chapter in the workplace and shall not affect the authority of employers to enact and enforce workplace policies restricting the consumption of marijuana by employees.”

However, the law also states that “a person shall not be arrested, prosecuted, penalized, sanctioned or otherwise denied any benefit” for engaging in any activity made lawful by the statute. The apparent tension between these provisions is certain to raise some disputes, particularly for public employers, with very little time to plan for them. It is going to be an interesting first few months.